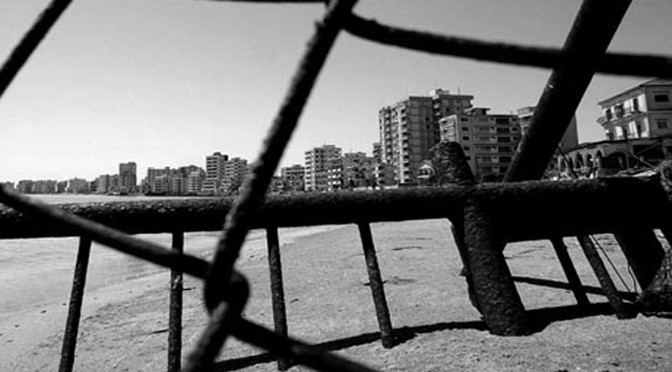 A GROUP of Greek Cypriots and Turkish Cypriots from Famagusta yesterday called on the two leaders to take decisive steps to reunite the city, saying they were ready to help revive the entire district, both sides of the dividing line, through a “common vision”.

Just a stone’s throw from where the two leaders were due to meet last night in the buffer zone, the Bicommunal Famagusta Initiative (BFI) called for the return of Varosha to its legal owners under UN control, the opening of Famagusta port for trade, and declare the old walled city of Famagusta a UNESCO World Heritage Monument.

The Famagusta Initiative was first formed by Turkish Cypriots in 2010 who wanted to see the above three goals implemented.

Following recent developments and President Nicos Anastasiades’ proposal to open up Varosha as part of a package deal, a group of Greek Cypriots, including the Famagusta Chamber of Commerce and Industry (EVEA), welcomed the Turkish Cypriot initiative, and decided to join forces to develop a common vision for a sustainable revival of the wider Famagusta region.

The BFI hopes to see agreement on confidence-building measures regarding Famagusta which could lead to a comprehensive settlement.

The Initiative’s main immediate goal is to prepare a revival project for the wider Famagusta region, including the enclaved city and the walled city.

“A successful eventual revival of Famagusta will bring social, cultural, economic and political benefits for the whole island and thereby contribute to the peace process,” said the declaration.

Original member Okan Dagli said the aim was basically to show the public that the two communities could cooperate for a common cause which would push for an overall solution.

Presenting part of the “common vision” for the city, George Lordos said: “The goal should be a city of tomorrow – a model of peaceful co-existence and a magnet for creative youth to live.” A city that would be ecological and technological, he added.

On the initial Turkish Cypriot initiative, EVEA chairman Giorgos Michaelides said: “They want us to go back to our city, and work together for the development of the whole region. What else do we want?”

Another member, Hulusi Kilim noted that a recent poll of Turkish Cypriot residents of Famagusta showed that 82 per cent agreed with the proposal to return Varosha.